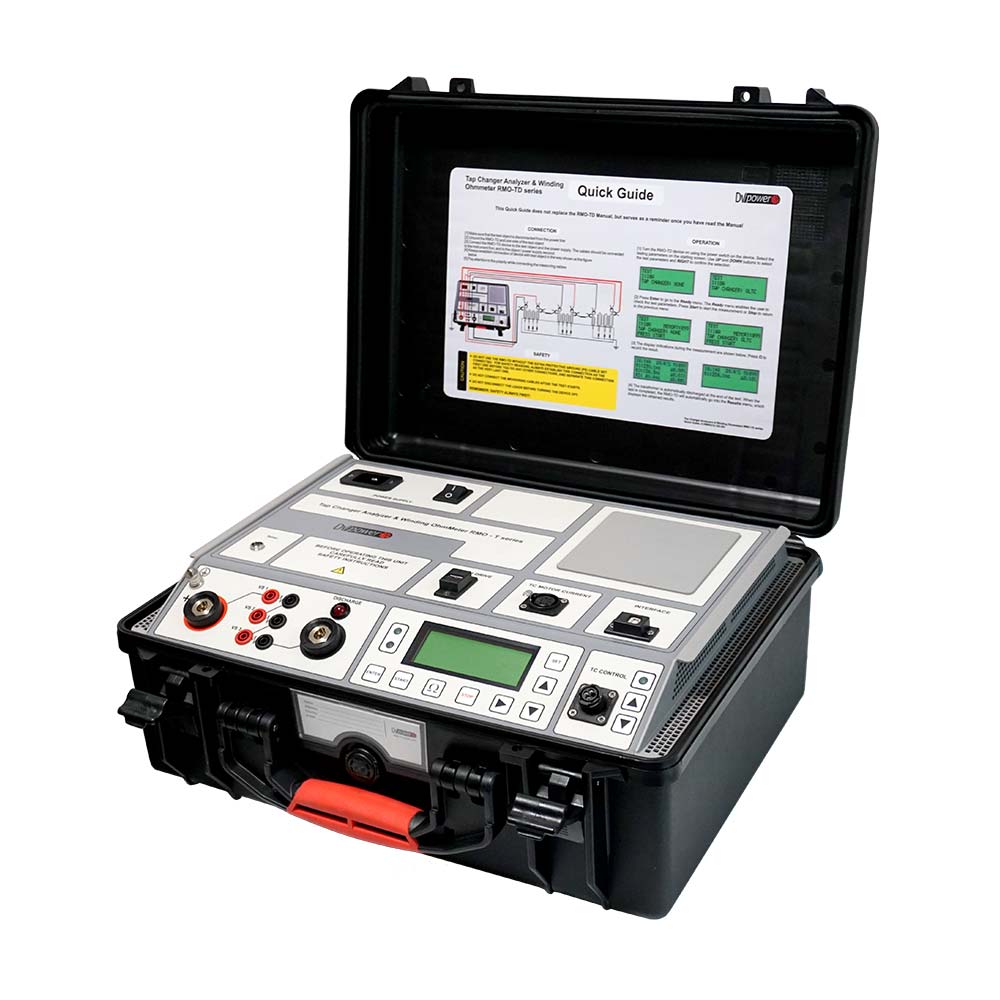 The RMO-TD Series On-Load Tap & Winding Resistance Analyzer is designed for the measurement of winding resistance of inductive elements, and for tap changer analysis. The RMO-TD series is based on the latest technology, using the most advanced switching technology available today. The RMO-TD series is accurate (0.1%), powerful (up to 60 A) and lightweight. It generates true, ripple-free DC current with automatic metering control and a discharge circuit.

The RMO-TD series can perform on-load tap-changer evaluation simply, quickly and reliably. This series allows measurements of the winding resistance at each tap position, current ripple values (percentage of current drop during a tap change) and duration of tap change transition times. With this equipment, problems can be detected in the connection, contacts and switching operations of the selector/inverter.

Connection of the RMO-TD to the transformer

The RMO-TD injects the current with a high voltage value of 55 V. This allows the magnetic core to be quickly saturated and the test duration to be as short as possible. The three independent channels allow for simultaneous testing of 3 windings in series - primary, secondary and tertiary. There is enough memory in the RMO-TD to store a thousand measurements. All measurements are recorded with date and time. The device is equipped with thermal and over-current protection. The RMO-TD has the feature to cancel electrostatic and electromagnetic interference in HV substations. This is achieved by means of a patented filtering solution applied in the construction of the hardware and in the implementation of the application software.

The RMO-TD can be used to measure the resistance of the windings of each individual tap of a power transformer without discharging between tests. The test duration is not limited. The equipment also checks whether the On-Load Tap Changer (OLTC) switches without interruption. As soon as a tap has changed from one position to another, the equipment detects a sudden and very short drop in the test current. These so-called "ripple" drops should be consistent; any drop outside of the expected range should be investigated. Tap switch malfunction can be detected by analyzing the measurements of the transition ripple, transition time and DRM graphic display. In addition, the motor current of the tap changer is recorded and displayed on the same graph. The built-in tap changer control module allows remote control of tap changer operation from the equipment's keypad.

The DV-Win application software allows the control and observation of the test process as well as the storage and analysis of the results on a PC. It provides a test report, available in a selectable format as an Excel sheet, pdf, Word or ASCII format. The software provides an evaluation of the OLTC (tap changer) condition by analyzing the graphs representing the dynamic resistance values during tap changer transitions. In addition, DV-Win measures and calculates the OLTC transition time, ripple and winding resistance for each tap change operation. The standard interface is USB, RS232 is optional.